Amid the dire situation of Covid-19 - some positive aspects

This last week has felt like a surreal whirlwind - hourly bulletins felt like another punch in the stomach - like a pounding punch bag - on and on and on - and still the pounding goes on. Little by little daily life is changing for the majority of people of all ages. I personally think the world is changing and will never be the same again.

It is a worrying time for people who have lost their jobs as a result of this virus - the government has stepped in and will be doing things to alleviate this - up to a point. Children are going to be deprived of schooling, while those of ‘key workers’ will be offered day-care in schools. Independent schools such as my son’s prep school are doing amazing work via on-line learning and live classrooms. My son is going to be expected to wear his uniform as there are cameras on the computer. My son’s future and that of many others is uncertain - he is in his last year of prep school and we have no idea if the school he is going to will open. I am sure the independent sector will have school closures for good - that is free market capitalism at work. No doubt the big names will still be there.

My own plans came to a shuddering halt - I had just finished a teaching qualification - luckily I passed the final exam and I now have a qualification to teach in the post-compulsory sector. I was already teaching Spanish (that had to stop) and I was planning to start cookery workshops for all age groups from our stable annexe. I had done the food hygiene certificate and I am DBS checked etc. All that has been put on hold. I doubt the environmental officer will be visiting my kitchen now.

My 2 adult children have left London and will be living at home for the next few months at least - that again is challenging now that there are 5 people in the house. We have agreed ground rules - who will cook on what night etc - now that we all have ample time to cook from scratch! I now have the opportunity to teach my 13 year old how to cook - high time - yes absolutely! But that’s a positive surely? Well yes - actually there are some positives from this situation. I can think of a lot - so I am going to write some bullet points of the positive aspects to come out of this pandemic.

Today is Mother’s Day and the sun is shining and it isn’t too cold. Our local pub is doing well with 150 roast take-aways. The pubs have had to close so they are doing take aways instead - brilliant.

It is quiet isn’t it? No planes flying above and less cars on the road. Apparently for the first time Venice has dolphins arriving - as a result of less visitors I think. So that is a great postitive - quiet is good.

No commuting on crowded trains to London - that is GOOD! Another positive. So people have more time to do other things and no costly train ticket. Some commuters spend 3 hours per day just commuting - that’s 3 hours for hobbies or cooking from scratch instead of ready meals.

No more silly pride  and trans marches  - and climate change activists (the latter have their reward with this pandemic anyway). We all have to self distance.

No ghastly pop concerts and  festivals such as Glastonbury etc - where drugs and all sorts of immoral activities take place.

As a result of less dating now we are all self isolating, there will be fewer babies killed - and hopefully the abortion industry will be killed. That is good! Already the state of Ohio has closed the abortion clinics down - due to the pandemic. They say it isn’t an essential service.

The fashion industry was getting very depraved with skimpy outfits,  and as we are not going to parties, there is no need to dress up. I hope the fashion labels that treat women with respect will stay.
Fast fashion will die too - the young won’t be going to discos etc, so no need to buy cheap clothes that they throw away after one use. All these things are good for the environment.

Old fashioned dating will come back - the 2 metre rule will be like an invisible chaperone - protecting people from unscrupulous others.

People are going to learn to cook, garden, read books, listen to classical music, learn a new hobby - I mean these things are good!

Parents will actually have to look after their children - instead of putting them in daycare from a young age - this is good!

We will communicate more via the internet - watts app groups etc. People will take up writing letters again - learn to write. Stephen Fry was on the TV this morning and said he was taking up calligraphy. I think puzzles will be revived too - these are good for the brain.

No more classroom sex-education - this I felt was soul destroying to children - killing their natural modesty, with gross information.

Nature is going to flourish with less pollution - this has to be good!

Community facebook groups are inundated with volunteers all wanting to help the elderly and vulnerable. This is a war time spirit of helping others - surely that is good!

People will have time to evaluate their lifestyles and maybe have a career change - some will be forced to anyway - especially those in the arts and entertainment industry. A lot of out of work actors will be looking for other work - maybe join the front line and train up as nurses/doctors. Not to mention all the out of work athletes who will also want another job.

No more ghastly soap programmes like Casualty and Eastenders. So grim anyway. And the viewing is unsuitable for children anyway.

No Gary Lineker - as there is no sport to report on - Alleluia! - he is such a self-preening man. Can’t bear him.

I am sure this is just a small list - I am sure there are other positives to come out of this crisis.

Oh gosh - No more Novos Ordo masses! The most interesting thing is that exactly 50 years after the questionable Pope Paul 6th forced the new mass onto the world -  it has stopped  - no more public vernacular masses. He had no right to ban the Old Latin Mass - and in fact you can now watch live stream Old Rite masses from various locations in the world.

The world has entered a paradym shift - a new era is upon us - look on the bright side.

You have time to read the Holy Bible from cover to cover - you can say the entire rosary.
Wash your hands while saying the Our Father - it takes 20 seconds.

The proper Bibles are the Douay Rheims and the Ronald Knox translations. Don’t trust the Vatican 2 translations as the Masonic cardinals deliberately mistranslated parts.

I hope Francis repents of all the damage he has caused the Catholic Church - I hope those spoilt cardinals get on their knees and beg for mercy for all the trouble they have caused. I hope they are humbled and once the Vatican bank scandal comes to light they will have to make amends.

A new time has arrived - seize it for the opportunities it offers.

Thank God for all the things we have.

Starting Friday 20th March, I shall be reading though the Holy Bible every day.

Here is my first recording on utube.

I have just finished my teacher training and will be running cookery clubs for children and adults. The children’s ones will be during school holidays and will focus on good nutrition and essential cookery skills - including making bread. Essential sewing skills will also be offered. All clubs take place in a rural location. The children cook the food and then eat it for lunch. They will have recipes to take home. During breaks, they will be allowed to play tennis or table tennis or simply enjoy the garden.
I have obtained my level 2 in food hygiene and I have an enhanced DBS certificate. I trained as a professional cook in Cornwall College and studied my advanced Diploma in Nutrition and weight management with Future Fit Training.

The adult workshops will also focus on healthy cooking - using alternatives to white sugar. There is a maximum of 5 per session.

Here is the first children’s holiday workshop - I am offering one of my silicone cooking forks free as an introductory offer for each student.

I will have more dates for July and August - watch this space! 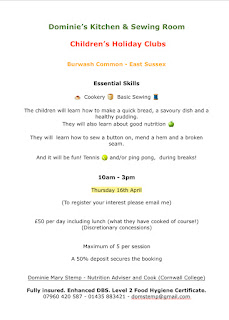 Posted by Dominie Mary Stemp at Saturday, March 07, 2020 No comments: