My sister was in a panic recently as she and her family were off to Sorrento in Italy, for a summer holiday. The panic was that she only had bikinis for the beach and the mayor of the town has banned all bikinis and topless men from public places. Moreover, anyone caught flouting the rules will be fined up to £425. This is because the local people find too much flesh on show offensive. The mayor also blamed women wearing bikinis and men showing bare torsos on the widespread “indecent behaviour”. Smilar bans are in other coastal regions such as Praia a Mare in Calabria. The original article was from the Daily Mail dated 7th July 2022.

Personally I don’t wear swimming clothes of any description as I don’t swim - it is ruinous to my hair which is fine and delicate and frizz prone. I also don’t swim because I like to see what’s in the sea, and having seen “Jaws” at the tender age of 12, it put me right off swimming in the sea. I also don’t sunbathe as it causes skin cancer, so I find it is more practical to wear flowing cotton and linen and not have to put horrid suncream all over, which, by the way is full of chemicals.

Bikinis are  gaudy and tasteless and women’s bottoms generally are not attractive as they are often rather large. Bikini tops are so skimpy nowadays that yes, they are indecent. Men’s torsos often have a beer belly. I salute the mayor of Sorrento for this brave stance! He's a brave man in these politically correct gone mad, times.

Some fashions today are awful - women wearing  masculine trouser suits, and men wearing effeminate clothing. Where has elegance and dignity gone? Where has effort into one’s appearance gone? Was the current state of dressing part of a long term dark plan?

I am reading the book by former fashion model and weather girl Colleen Hammond, called  “Dressing With Dignity” - first published in 2004. it is an eye opening book citing Catholic Church teaching on this subject, and how the Freemasons long term goal is to the destroy the Catholic Church from within  - using subtle and subversive means.  One of these means is through women, knowing that women are usually the moral compasses of society. They wanted to make women reveal more flesh, which in turn would tempt men into adulterous liaisons, leading to marital breakups and divorce. So how to do this? Infiltrate the fashion industry. The other masonic plan was to infiltrate seminaries, and have masons amongst the clergy - this they have achieved superbly. That is why it is a mortal sin for any Catholic  to be a freemason. See below for a definition of Freemasonry.

in 1928 the Freemasons revealed their plan in the International Review on Freemasonry, and I quote;

“It is necessary to corrupt, that our boys and girls practice nudism in dress. To avoid too much reaction, one would have to progress in a methodical manner; first undress up to the elbow; then up to the knees; then arms and legs completely uncovered; later, the upper part of the chest, the shoulders, etc”

The rules stated that -

“A dress cannot be called decent which is cut deeper than 2 fingers’ breadth under the pit of her throat, which does not cover the arms at least to the elbows, and scarcely reaches a bit beyond the knees. Furthermore, dresses of transparent material are improper.” (Short sleeves were permitted as a temporary concession because of “impossible market conditions.”)

“Maidens and women dressed immodestly are to be debarred from Holy Communion and from acting as sponsors at the Sacraments of Baptism and Confirmation; further; if the offence be extreme, they may even be forbidden to enter the church”.

in 1946 the Canadian bishops told men to wear shirts in public - including beaches, and to avoid tight trousers.

In the summer of 1946 the first bikini was shown at the Paris fashion runways.

Pope Pius XII in 1954 admonished young girls saying that if their outfits were an occasion of sin for others, then it was their duty not to wear them. He asked mothers to make sure their daughters dressed in a dignified way.

I have already put a blogpost regarding Cardinal Siri on women wearing trousers - so I won’t repeat it here.

My spiritual father Padre Pio would not give absolution to a particular woman unless she stopped selling women’s trousers in her shop! This was in 1963.

What does the Holy Bible say about clothing? Deuteronomy 22:5 says “A woman shall not be clothed with man’s apparel, neither shall a man use woman’s apparel: for he that does these things is abominable before God.”

Blessed Jacinta Marto, one of the three little visionaries at Fatima, Portugal 1917 was told by Our Lady in 1920 that, “Certain fashions will be introduced which will offend Our Lord very much. Persons who serve God must not follow the fashions. The Church does not have fashions; Our Lord is always the same. The sins of the world are very great…”  Excerpt from "A flower of Fatima" by Rev G de Oliveira, pg 164.

Our Lord told Alexandrina da Costa (1904-1955), that “Vanity and extravagance in the world must cease. Let those exhibiting their bodies clothe themselves. Let modesty reign.  Penance! Prayer! Much prayer is needed!” Taken from "Alexandrina" by F Johnston, pg 101.

I could go on - but I don’t think people like reading too much at a time,  so I have kept this article to under 2 pages long.

The book is still in print and I really recommend it!

Freemasonry is a secret society founded in England in 1717. They have secret doctrines, rituals and oaths. They consider masonry to be the universal religion, and they honour Jesus Christ as they honour Socrates, Buddha and Mohammed. Freemasonry claims that Christ is not divine and that satan is not evil. Taken from Bro. C Madden, O.F.M's book - "Freemasonry; Mankind's Hidden Enemy" 1955.

Posted by Dominie Mary Stemp at Tuesday, August 02, 2022 No comments:

I attended the Latin mass on Sunday 31st July, which was held for the first time, at a private room at Drift golf club, East Horsley in Surrey. The organiser, called Alan had done a great job of finding a suitable altar, with the perfect height of 31 inches (I think!). He was making all the preparations since 2am!

Father Peter Morgan had come all the way from Plymouth in Devon to say Holy Mass, thanks to a kind driver.

It was good to see many young families and very well behaved children. I didn’t count but I am guessing there were about 40 people or more.

Afterwards there was a room which served as a suitable place for teas and coffees.

Father Peter Morgan is hoping to come every 5th Sunday of the month, so the next one is on the feast of Christ the King.

Posted by Dominie Mary Stemp at Monday, August 01, 2022 No comments:

I have been informed of the following information. I plan to attend. See you there 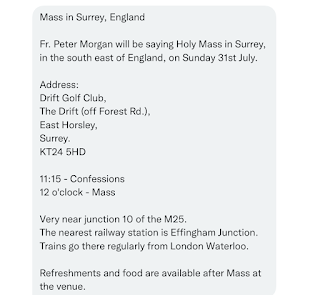 Posted by Dominie Mary Stemp at Saturday, July 23, 2022 No comments:

Cardinal Siri (the true pope of 1958) on womens clothing

This was written in 1960 by Cardinal Siri (the true pope of 1958 before he was “swapped” out illiegally. See whitesmoke.com

Posted by Dominie Mary Stemp at Thursday, July 21, 2022 No comments:

I no longer attend Novos Ordo masses, as I believe that the Second Vatican council was a robber council and allowed illiegal changes to the old rite Latin mass, making it like the English Protestant service. I also believe that the conclave of 26th October 1958, elected a false pope, who called the Vatican 2 wicked council. I do not accept this truly monstrous council.

Here is a recent interview, with Gary Giuffre, who made it his life’s mission to find out what happened to the Church since that infamous conclave of 1958, when the good Cardinal Siri was validly elected, but was threatened with death to his family, if he didn’t stand aside for an unelected ‘pope’. When one witnesses the chaos in the Church for the last 60 years, it is obvious that something very evil and sinister took place at that October conclave, and indeed later conclaves.

This is a most stunning interview

Posted by Dominie Mary Stemp at Tuesday, June 21, 2022 No comments:

Posted by Dominie Mary Stemp at Monday, January 10, 2022 No comments:

This is an extremely important video showing retired policeman Mark Sexton with evidence of crimes against humanity, by the British government.