What Satan and other demons said through Anneliese Michel - Germany1975. 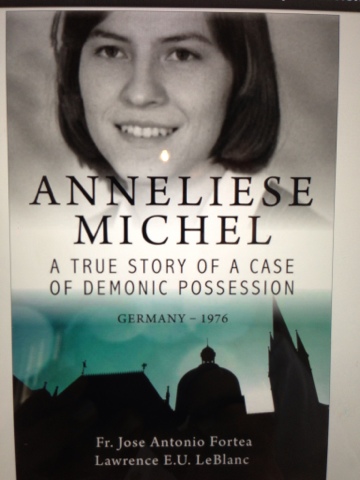 Sorry I haven't done a blogpost for months. I just had no time in the summer holidays running around my small boy and having workmen around the house doing plumbing works. We live in a very old house and every now and again we have to update certain parts of it.

I have just finished reading a rather disturbing but true and important story of a young German girl, who was demonically possessed in 1975-6. I think it is an important book because so many people including Christians simply do not believe in the devil nor Hell; yet these are 2 major doctrines in the Christian church! (yes - even the cosy CofE  - believe it or not! Really??? - YES sweetie pie!).  Indeed I feel it is very dangerous not to believe in the existence of evil spirits and Hell, because after we die, we face an eternity of either Heaven (with either a long or short spell in Purgatory) or Hell. It is a sobering fact that for Catholic Christians, it only takes an unrepented and conscious mortal sin to end up in Hell. That aint funny matey! And once there, there is never a way out. It is forever and ever. That fact alone should wake Catholics up! It scares the hell out of me (excuse the pun - if that is the correct term!). Of course -  thankfully all parishes offer the sacrament of confession. We need it! It makes me squirm in the box every time, but I need to go frequently!

The book is also important because of who the author is - a world renowned exorcist in the Catholic Church - Father Jose Antonio Fortea. He travels around the world doing case studies of demonic possession. He has also done an interview which is now on a DVD called "Interview with an exorcist", through St Anthony's Communications. It is well worth watching. www.saintant.com

Fr Fortea wrote the e-book in 2012 and it is about £6 on Amazon. It is called, "A true story of a case of demonic possession" The film, "The exorcism of Emily Rose" is based on this case - which is known as the "Klinenberg case". Klinenberg is in Bavaria, Germany - also the burial place of Anneliese Michel. It is now a place of pilgrimage.

Anneliese (born in 1952) was a pious girl from a strong Catholic family. She was part of that period in the Church when changes were happening in the holy mass (some legitimate, some definitley not). When communion in the hand was introduced, she instinctively felt this was wrong, so she stopped going to her parish and found one which kept to the correct way. It was also a time when many clergy stopped believing in many doctrines, for example referring to demons as medieval theology. It was a time of dissent in many parts of the Western Church. The rebellion against Humanae Vitae (1968) was widespread, and many other teachings were being questioned or challenged. One could call this period onwards a diabolical confusion. Sadly the confusion hasn't ended.

Anneliese Michel had a vision of Our Lady in her early 20s. Our Lady asked her if she was prepared to suffer much for German youth and priests. She agreed. The suffering would be in the form of demonic possession. She was to be a "victim soul". Anneliese was to show Germany and the world that devils really do exist. Throughout her possession, she still prayed, went to mass, said the rosary and received the sacraments.

She would be possessed by up to 10 demons some of whom revealed themselves - Lucifer, Cain, Hitler, Nero and Fr Fleischmann, among them. The 2 priests who carried out the exorcisms were not supported by their bishops - they suffered much. They knew she was possessed, having carried out all the tests that have to be done when deciding on a case - it is pretty meticulous. (Father Fortea talks about the assessment in his interview). The priests recorded the exorcisms which means there is a record of what was said. What the demons say is revealing. I am only going to put some of what they said, and these were published by Father A Faroni. Father Fortea includes them in the e-book.

Word of warning! Some of what the demons said are controversial - they might make you hold your breath! I held mine!

"I want to conquer the earth for myself. In the meantime, I make a rich booty. I am filling up my kingdom. I take whatever I can take, I must convince you of this".

"The majority have abandoned the Nazarene. How foolish! Those still faithful are a small flock".

"I took Judas with me! He is always at my service. He is damned. He could have saved himself, but he has not followed the Nazarene".

"The enemies of the Church belong to us".

"O, if you had an idea of how things stand below! The visionary children of Fatima have seen it. If you had an idea..... you would be on your knees day and night at the tabernacle. I had to say it because the High Lady compels me to". The 'High Lady' refers to Our Lady.

Fr Renz asks Lucifer - "You are responsible for heresies, eg those of Kung!". Lucifer replies - " Yes and we have still more".

Lucifer said - "The priests should say that I exist. Or else they will all go down!"

"I will not come out of the girl. Down there, it is too tormenting".

"If people knew what was in store for them by not going to church! It will fair them extremely bad".

"These modernists are the result of my work and they already belong to me".

"They no longer obey the Pope in Rome. It is the one in Rome who still keeps the Church going".

"Humanae Vitae is also with no result. It is useless"

"The religious in monasteries watch TV and don't pray enough, do not kneel down and they extend their paws (ie, receive Holy Communion in the hand).

"I have killed my brother. I am burning"

"Men are so beastly stupid! They believe that after death all is finished. But life goes on, either up or down"

"I was a priest at Ettleben. I am damned. It is horrible down there. Judas pulled me down there".

" I am damned because I fulfilled my duties very badly"

"I have killed 1 person and I had women".

"I prayed too little. I was always in a hurry to finish my sacred duties. Now, I am down there languishing for eternity".

"No priests should marry".

"If the bishops did not permit communion in the hand, this would not have happened" (this refers to consecrated hosts being sold).

"The rosary should be recited, or else it is the end!"

Fr Renz asks about Bishop Lefebvre. Lucifer replies, "Ha! That one! But they don't believe in him. What a pity".

"The modernists are killing the Church. We are hard at work at this".

"No one speaks any longer of us, especially the parish priests".

"The bishops are so foolish as to believe the theologians like Kung rather than the Pope."

"This is the month of the rosary but very few recite it, because the parish priests think it's not modern. They are so foolish! If they knew its importance! It is a strong weapon against Satan and against us."

Nero said, "The Dutch bishops are heretics. They have become unfaithful to the Pope!"

"Catholics have the true doctrine and they run after the Protestants like prostitutes!"

"There in the synods, they continue to deliberate. The bishops already know what they should do. There would be no need of synods if they followed the Pope. For them the Pope is foolish! They are those who let that thing (the host) be given in the hands!"
"The doctrine is falsified in the Church!"

"Many do not go to church any longer. No one kneels down to the Blessed Sacrament. And the Church is not doing well since the time it was founded. The churches are so modern! The Nazarene and His Mother are now attacking!"

"People should go to confession".

Judas says, "The giving of Communion in the hand was my work".

"Holy water should come back to houses! Also, the crucifix should return to its place in the home".

"The Holy Face should be venerated!"

"The Divine Mercy image should be propogated".

"It is very important to pray to St Joseph. Rather it is most important!".

"If the message of Fatima is not given due importance and Humanae Vitae, a new punishment will come".

"It won't last much longer. The chastisement is coming".

"The contents of the audio cassette must beforehand be made public. Many will yet be saved."

Lucifer said, "The apparitions of San Damiano and Montechiari are true. The Church did not approve them, but this is the fruit of our work."

Judas said, "People standing during Holy Communion pleases me more than kneeling. I do everything possible that no one be on his knees."

"The films are bad and TV not better".

The 2 priests involved, and one of their bishops all believed Anneliese was possessed. It was the first official and public case of exorcism in Germany in 50 years and the only known case recorded on tapes. There have been no known exorcisms carried out in Germany since Annelies's death. The author believes she died a martyr.

After 67 sessions she died on 1st July 1976. People have been visiting her grave since her death. It has acquired pilgrimage status.

The author of this book applauds the following films, for showing the reality of possession - "The Exorcist", and "The Exorcism of Emily Rose". The most famous living exorcist - Gabriele Amorth also recommends these films, for their sheer realism.

Sobering stuff. A jolly good book. As an ebook you can get a free sample for your kindle.

Of related interest is the book by atheist Dr Felicitas Goodman - "The exorcism of Anneliese Michel". She was a witness during the exorcisms. She writes from a scientific background. It is available in paperback on Amazon.

My spriritual father - Saint Padre Pio - used to be quite blunt with people. One example is when people would come up to him and say they didn't believe in Hell nor the devil. He would scowl at them and say, "You soon will when you get there!" St Pio pray for us!
If you are a lapsed Catholic - I hope you realise that missing Mass on Sunday (or Saturday night) without a serious reason is a mortal sin.

I composed a photo of devotional items and a doctrinal encyclical which the demons said are REALLY important! The other important devotion - which I don't know much about, is the Five sacred wounds of Jesus. 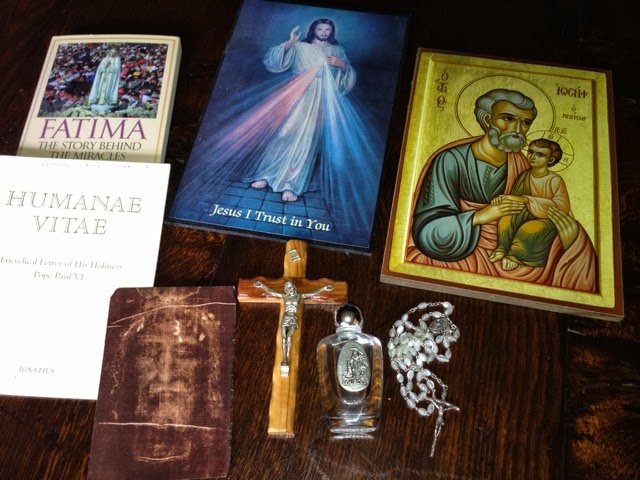