Fatima and the on-going controversies

I am very attached to the Fatima story. I grew up with it - I knew the story off by heart as granny re-told it so many times. I learnt about the the miracle of the sun which spun off its axis and zig-zagged towards earth - and how 70,000 people witnessed this event on 13th October 1919. Their eyes were not damaged and having sodden wet clothes before the sun episode, their clothes were bone dry afterwards. All the press reported this event.

The secrets fascinated me - especially the vision of Hell - which Our Lady showed the little seers - to show them how many souls go to Hell because no one prays for them. They saw a hideous vision of blackened humans screaming out and demon-like figures. Jacinta - the youngest of the visionaries was only 6 or 7 when she witnessed this event.

Granny was also a member of the "Blue Army" of Fatima. She had a statue of Our Lady of Fatima in a wooden box with doors. On each of the doors is a list of what Our Lady wants us to do - things like saying the rosary daily, doing the First Five Saturdays and other devotions. The prophecies are also on the doors.

But I didn't realise about the 'controversies' surrounding Fatima until I started studying more deeply around 10 years ago - especially about the 3rd secret. Our Lady wanted the Third Secret to be read out to the world in 1960. The world waited with baited breath as 1960 approached. The Pope read the secret to himself and said it wasn't "for now". The world did not get the Third Secret. There must have been something dire in that secret which was then put in a vaulted safe. What is so terrible in that secret?!

Also - was the consecration of Russia done properly? Some say yes, others say definitely not. Fr Gruner of the Fatima Apostolate in Canada is in the latter camp - he has done endless studies of it. Fr Gobbi (RIP) also said the 1984 consecration was not done in full as Pope John Paul II consecrated the world - although there is evidence to suggest he wanted to mention Russia but the iron 'powers in the Vatican' stopped him.

Well we can study the fruits of that 1984 consecration of the world - yes Communism did start falling and that is good. But have we had the period of peace which Our Lady said we would have once Russia was consecrated? A sort of false peace maybe. Trouble is - Communism might have 'died' but it started rearing its head under another name - secular humanism. The EU is a case in point - it has become very dictatorial of late. Our Lady also said Russia would become Catholic - well we are still waiting.

We know a Pope will consecrate Russia because Our lady said - "The consecration will happen, but it will be late - once the bloody events are under way". Well I think we are at that point - there are bloody events all over the world - in Nigeria - Christians are being burnt - their churches burnt down - look at Syria - look at the Middle East. The world is in a deep state of unrest - the EU and America are bust - the unemployment rate in places like Spain is leading to youth unrest. In London - a young officer gets literally macheted by a nutter. Abortion continues unabated and real horror stories such as the Gosnell Trial have come to light (there are many Gosnells out there apparently). A baby was rescued from a sewer pipe in China last week. Every other day there is yet another case of child abuse - this time a 4 year old boy - Daniel Pelka starved to death   by his evil parents and fed salt - it made me sob. Is this peace?! The Hell it isn't! The world seems to have lost its moral compass - the 10 Commandments are ignored at its peril.

Back in 2000 or thereabouts the Third Secret was read out to the world - apparently. But it was actually so bland and mild that you wonder why it was hidden for so long. No there has to be another part which is too dire - and yes - like Mother Angelica of EWTN, I too think it's scary.

Antonio Socci - the well respected Italian journalist - was asked by the Vatican to research the Fatima  story and toe 'the party line'. He agreed to work with the Vatican. But he came out with a different viewpoint - so much so, that he wrote a book called "The Fourth Secret of Fatima". He had been happy to 'toe the party line' but what he uncovered was a very different story. It's a jolly good read and I recommend it - now translated in English.

I came accross a very interesting website www.solvesecret.co.uk written by Iain Colquhon. It contains useful information on the Fatima controversies.
The other useful website is www.fatima.org
And www.catholicvoice.co.uk/fatima3/

Photo of one of granny's statues. 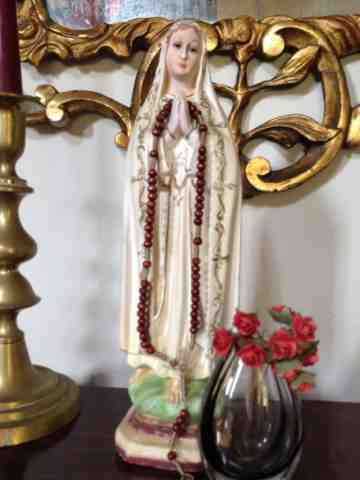