My husband and I have just been on a 3 day trip to Istanbul. You see, my mother very bravely took our 6 year old son skiing in Les Arcs, France, and so we took the opportunity of going somewhere without a small child.

My husband wanted a warm place which wasn't too far away, and somewhere we hadn't been to before. He always sorts our holidays and likes a nice hotel so we booked the Four Seasons Hotel - bang in the middle of the city - and right next door to the most famous sights - the Haya Sofya and the Blue Mosque. The famous Grand Bazaar was also nearby.

We had dinner in the hotel for our first night and it was a Turkish delight - we like to go native in these countries and not choose the rather safe International menu. It was the right decision. Turkish food uses spices very subtly and the meat isn't fatty. I can't abide fatty meat of any sort.

A helpful guide 'picked us up' as we were wandering over to the queues to the Haya Sofya, and he was able to jump the queue (it is worth getting a guide!). He showed us around the amazing former Christian basilica, and later mosque, which is now a huge museum. Over the years the restoration work has uncovered gorgeous huge mosaics of Jesus, Mary and John the Baptist. These are stunningly beautiful. Up in the massive domed ceiling the Archangels are revealing themselves. The shop sells reproductions of the mosaics. Our guide - a Muslim (although he said he wasn't that devout) explained that Jesus is revered as a prophet, and his mother Mary is revered).

Then he took us to the Blue Mosque. Now I regard myself as a fairly modest dresser, but alas, my skirt was just too short - just above the knee, and although I had thermal tights on and long boots, I was handed a wrap-around. I did bring a headscarf as women are required to cover their heads inside mosques ( a practice which also used to be the rule in Catholic Churches until the new Code of Canon Law -1983 came out, which didn't mention the subject. This is still an area of controversy in the Catholic Church and I will write a blog about head coverings in the later blog, when I have researched it a bit more).

Inside the mosque it was very huge and very blue, and the patterned carpet was predominantly blue. Our guide explained that the women and men pray separately. In another mosque we visited - by the Grand Bazaar, there was a slatted wooden screen to separate the women from the men -  some women were praying quietly on their knees when we visited.

The shops are very different in Istanbul. I didn't see any department stores like John Lewis. Just little independent shops, selling specialised items. The ladies fashion shops were interesting. No tarty little skirts and bondage-like shoes or skimpy little tops (unlike in Europe). There is something to be said for the modesty of Muslim women. Oceans of lilly white exposed flesh is not that attractive and men find it boring after a while - no mystique left.

It was around this time that Baroness Thatcher died. My husband had a crush on her when we were at Exeter. He used to kiss a cushion and pretend it was Maggie - "Oh Maggie" he used to cry out whenever she was on the TV - grabbing a cushion. She took such trouble over her appearance and dressed modestly and elegantly. She never exposed cleavage and I don't think she ever wore trousers, even though she 'wore the trousers' in cabinet and (presumably) at home. Most women (in my opinion) do not look good in trousers - which are usually far too tight and expose thick thighs and fat arses (there are exceptions of course!). I do not suit trousers and don't own a single pair. Out of respect for my spiritual father St Padre Pio - I don't wear them. He said women should not wear them. Also - Our Lady of Fatima said that fashions would be introduced in the 20th Century - which would displease Our Lord. I would say the major fashion change was women and trousers. They only really started wearing them in the 1970s. The New Testament also says men and women should not dress in clothes of the opposite sex. St Paul is explicit about this in his letters.

Now you can't leave Istanbul without buying a rug - so our guide took us to a 'government' shop, where you can't haggle. We had the most amazing show of rugs accompanied by Turkish black coffee and honey. These 3 men - flung out a dazzling array of rugs and runners and promptly whipped them the other way in unison so we could see the light and the dark sides. They liked comparing their wives bad cooking to their mothers' better cooking. Quite what this had to do with rugs I have no idea, but it added to their 'show'. 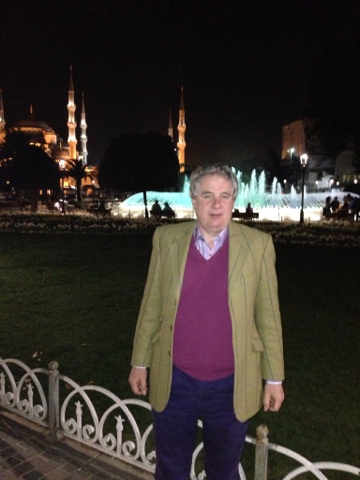 Matthew with Blue Mosque in background 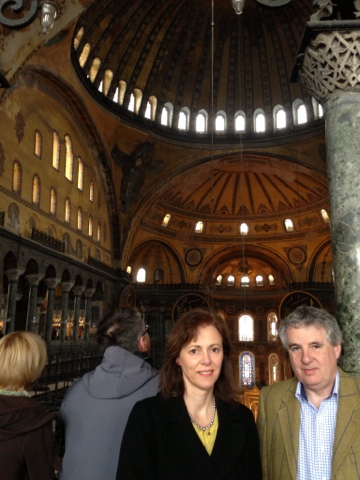 At the top of the Haya Sofya

Below - one of the runners in the carpet shop 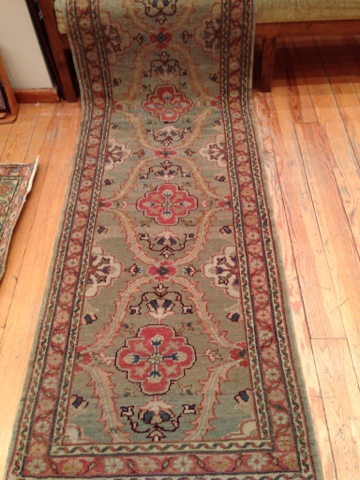